Celebration for the families in “Grand Chêne”

As happens every year, on Saturday, July 2nd, “Grand Chêne” organised a feast for the residents, families and friends, volunteers and staff. All were invited to bring a “knitted square”, measuring 17 cm by 17cm.

The squares were to be joined to make a patchwork quilt, symbol of our unity in diversity.

At 10.30am, Father Morel celebrated Mass in a crowded Chapel. Over an aperitif after Mass, Madame Jacquemoud, Directress, welcomed the participants and thanked all those who supported the numerous projects already achieved or those still under way.

This was followed by an outdoor buffet and items of entertainment. In the afternoon, the celebration continued with a performance from a theatrical group of the local ‘Residence’, called, Les “Farfelus” (“Scatterbrains”)

During a presentation by Gregory Benoit, Director of the company called, “Eyes Wide Open”, a version of “The Little Prince”, by St Exupéry, was enacted. The average age of this troupe of 13 actors is 83 years. This was the 2nd year since the company was formed, during which there were some remarkable performances in the Seynod auditorium, and last year, at the Malaz Festival. The amateur actors attend training sessions at least twice a week. They work on expression or, again, on improvisation. This activity is stimulating and important for their self esteem. The celebration ended with a concert directed by Isabelle who is employed in the kitchen, and by Sylvie, the animator. This day underlined how the Residence is a warm, life-enhancing place.

The “Farfelus” (Scatterbrains) perform an adaptation of ‘The Little Prince’ 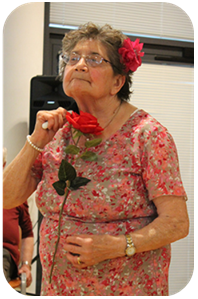 “When one is not familiar with retirement homes, one cannot really understand how an actors’ studio can be formed for Residents of such establishments. I had the chance to meet a group of “farfelus”(scatterbrains) whose generosity, greatness of soul and a sense of sharing showed me that there is no age-limit for blossoming together”.

“A life, a humanity which I was not expecting to see”

The comedians interpreted an adaptation of “The Little Prince”. They memorised the text as would any ordinary troupe. When they stumbled over a difficult text, the prompter would intervene.

“The theatre has much to offer, promoting self esteem, reinforcing a feeling of self efficiency, belonging to a group, but also with regard to linguistic and cognitive efficiency”.

Even if it is not the primary purpose of this project, it serves to change one’s way of seeing things.

“To change the way not only the general public see things, but also families and teams. Thanks to the theatre, I have come to recognise that one of our Residents can speak, I who have never heard the sound of his voice”, says the Directress.

In this regard, it was impossible to detect the illnesses from which the comedians were suffering. Moreover, the troupe presented themselves as coming from a retirement home, without giving further details.

For the troupe, the stage acts as a driving force. A section of the actors would even love to go on tour for a week. The idea is presently under discussion.

“It is a beautiful example of how life continues”, self-congratulates the Directress. We must not lose sight of the fact that today, there are possibilities, that one cannot do everything but one arrives at putting in place 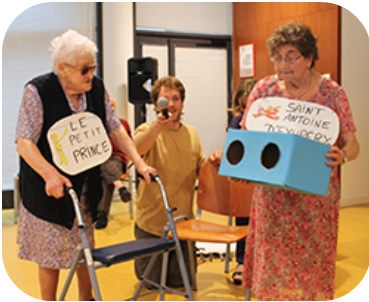