A bit of history: This day came about on the initiative of Father Joseph Wresinski with thousands of people from all backgrounds gathered in the Human Rights Square in Paris in 1987. Since then, every year it is celebrated on 17 October.

In 1992, it was officially recognized by the United Nations. Why this day?

The following took place in Annecy this October 17, 2018

The ATD Fourth World team, of which I am a member, met to prepare this day with the theme: "Unite with the most excluded to build a world where human rights and dignity are universally respected "

On October 17 from 14 h to 18 h, our small ATD team was present as well as the MRAP (movement against racism and for friendship between peoples), at the Square François de Menthon, in Annecy around "The Tree of Rights" a cardboard image that included the trunk of the tree, the branches and separate cut out leaves that were made from colored fabric as part of our promotional exhibition and activity.

This so-called tree gave the people who passed by the opportunity to stop and discuss the theme with us. It also gave the passersby a chance to write on a cut out leaf their own witness comments, a quote, a human right that is not respected or just a wish for a better world and then to put their leaf on our human rights tree.

Here are a few examples: “I want to live like others with my family and my children. Life is better when we're together.”

« We're all equal white or black, male or female. I'm having French classes with Greta to learn to read and write”.

“I had difficulties to find a job: I was told: we don't take people like you “(a Romanian traveller.)

"We can help others rise out of poverty by helping them find work."

"Young homosexuals are still rejected by their families."

The afternoon was successful in bringing about a greater awareness of human rights and also enabled many passers-by to discuss with us the themes of exclusion, racism and poverty.                   Sr Marie Ducrot

To supplement this information, here is a snippet from the Dauphiné newspaper, released on October 19, 2018, written by H. Richemoz. "Since 1987, October 17 marks the world day for the eradication of poverty. The theme chosen this year by the United Nations was: "Unite with the most excluded to build a world where human rights and dignity are universally respected. ».

On that Wednesday, in Annecy, the ATD Fourth World movement against racism and the movement to develop friendship between peoples (MRAP) with the organization Emmaus were mobilized to stage a session of awareness and participation with the passers-by. The volunteers from these three associations displayed their different exhibitions and activities to passers-by, around multicolored trees. "Each branch symbolized one of fundamental rights", explained Anne de Calignon, militant of the ATD Fourth World team. The curious passers-by were invited to affix their leaf messages about violated rights or actions to be taken to reduce poverty.

"This tree was also an opportunity to attract passers-by, to open a dialogue with people and to give them the opportunity to hang a message, a quote, a commitment or comment in relation to the theme of the day”, says Anne.

“People are aware that poverty exists, but unfortunately it does not attract many people to take action “regrets Marcelle Molliex, MRAP militant.

There were several other volunteers engaging the public in Annecy on the themes of exclusion, poverty or racism, in the hope that they would alert many people to get involved in taking action on these various issues. »                            H. Richemoz, extracted 19 October 2018 Dauphiné 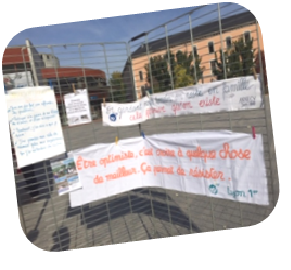 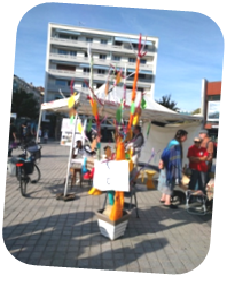