The new parish in the centre of Annecy to which we belong, has three churches. This year we are celebrating the 600th anniversary of the church of St Maurice which is close to our Convent. For this occasion, the parish team organised a pilgrimage to the place where St. Maurice and his companions were martyred in St Maurice, Switzerland. 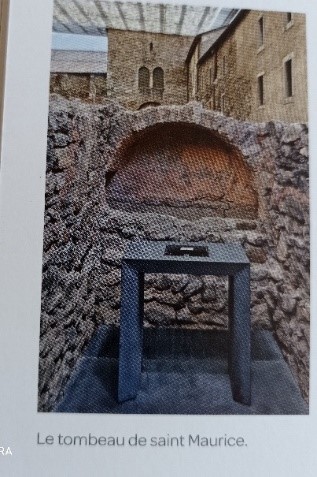 This Saint had, and still has, a significant place in our region here in Annecy and across the whole of Europe where many churches are dedicated to him.
The Christian history of St Maurice (formerly Agaune) began around the year 300 with his martyrdom and that of his companions. Coming from Egypt, those Christian soldiers were part of the Roman army. Following their leader Maurice, they refused to obey the Emperor of Rome who asked them to execute Christians. They were killed and buried on the spot.
Around the year 380, the first Bishop of that place began the veneration of these maytyrs which led to the establishment of the Abbey of St Maurice
The tomb of St Maurice
on the tomb of the Martyrs in 515, that is to say more than 1500 years during which the prayer did not cease, a prayer which has evolved over the years but which remains the dynamic centre of the life of the Abbey. Since the 12th century and up until today it is the Regular Canons of St Augustine who continue to provide this service and to accompany the pilgrims in their prayer. The Abbey is a very popular spiritual place.
The monastery itself reveals a long history through the Basilica, and the exceptional treasure which contains very old pieces of great archaeological wealth.
The excavations have brought to light a series of churches as well as the oldest remains of an ancient necropolis, including the tomb of St Maurice. 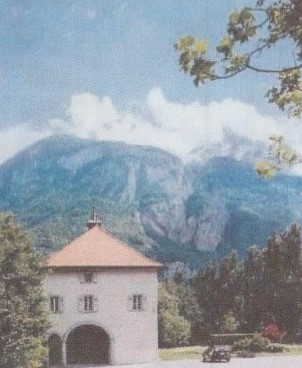 The second stage of the pilgrimage took us to Vérollier, the place of martyrdom. The journey was punctuated by various « stations » which formed part of the pigrimage.
We saw stained glass windows which represent the saints connected with the history of the Abbey. They remind us of the words of the Gospel: "If the seed that falls to the ground does not die, it remains alone; if it dies, it bears much fruit". (John 12:24)
The forty people with whom we spent the day were, in the most part, familiar faces, whom we had met during the celebrations. Between the picnic and the two kilometre we walked, there were some brief conversations with some of them...
May this be the starting point of more regular gatherings which would be a fount of vitality for the parish church as a whole!
The experience of the pilgrimage to that place took us back to the beginning of the Church and connected us with our predecessors in the faith... May St Maurice and his fellow martyrs accompany us on our journey of faith.